As I explained in a previous post, I have decided to move away from Google's Gmail service for email management, and from third-party email hosting platforms in general. This isn't really a great accomplishment, and I am not trying to brag about it, nor to convince anyone that they should make the same decision. But a handful of people have shown interest in the method and the attached costs. And in my close circle, a handful of people who show interest in computer stuff is an awful lot. So here we go.

My setup is composed of three main components: 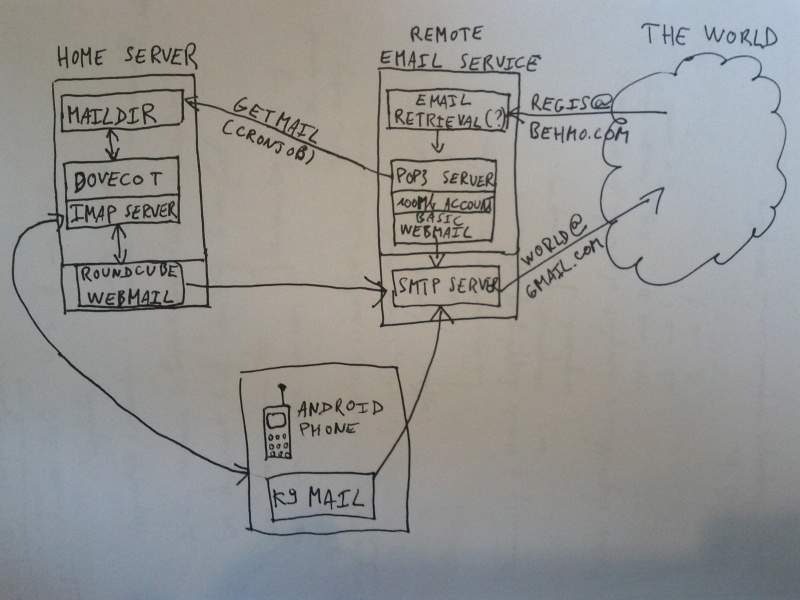 Friends had warned me that managing an SMTP server was a royal pain in the ass. In particular, you need to pay attention not to be blacklisted by any large email delivery platform, such as Gmail, Hotmail, etc. So I decided early on I was ready to pay for this service. It just happens that Regfish (which is also my domain name provider) sells some cheap email packages for just 1 euro per month. With this service come a couple pretty classic, but very useful services:

All in all, Regfish provide a reliable service. I have been one of their clients since 2005 and it has been a pretty uneventful ride since then (which is a good thing, as far as server and domain name hosting go).

Of course, the whole point of this blog post is to demonstrate how you can self-host your emails, so it would not make much sense to keep them stored on the remote server, right? What moves them from Regfish's servers to mine is a cronjob started every two minutes that makes a call to getmail. Getmail is a basic Unix utility to which you feed a simple cnfiguration file where you specify: the address and credentials of the remote POP3/IMAP server (in our case: POP3, as we don't want the remote server to keep a copy of the emails), and the local folder where you want your emails to be stored. In this folder, each email is stored as a plain text file, and subfolders define labels. That also means that it becomes very easy to backup your emails, but this part will come in a later post.

Everything has been relatively easy until now :) No, seriously, getmail, the cronjob and maildir are all a piece of cake to configure. You can try them right away with any third-party email hosting platform that provide a POP3 interface, such as Gmail, Hotmail or Yahoo! Mail.

The Dovecot part is tricky though. Documentation is sparse, to say the least, and strongly depends on your Dovecot version. I think that wikis are just a poor choice when it comes to documenting software or code, but that's just me. It's too bad, really, because Dovecot is supposed to be the best of its breed. Anyway, I won't be able to help you with the Dovecot configuraton, which strongly depends on our platform, but you should make it if you read carefully the documentation included with your configuration file.

I like my emails in a browser, not in a program such as Thunderbird or Outlook. I have looked long and hard for an alternative to Gmail's sleek interface (believe me, it has been long and it has been hard). Alas, the best solution I found is Roundcube, which is also the first result returned by Google when you search for "open source webmail". It's ugly, it's slow, it was coded in PHP, it doesn't support CardDAV for contact sync, but it works. Which is always better than most other solutions I tried. Install is easy, configuration and use too.

The whole thing works, and better: it is very robust and fault-tolerant. The only critical moving part that may not be unplugged is the remote mail server. If it fails, I won't even know it, except that certain mails will not arrive anymore. But that has never occurred until now. As I emphasised earlier, security of my email data is paramount and in this matter I have not been disappointed until now.

The only problems that I see with my setup are the lack of a dynamic, responsive webmail interface (I have even considered coding a better one myself), and of an integrated contact synchronization solution. Funambol works well in itself, but does not get along well with Roundcube. I keep looking.

Naturally, this installation has a financial cost. My personal server is a low-power computer that has been plugged at home 24/7 for the past year. Its construction cost was ~450€, but since I use it for may more things than just email, I consider that its cost has already been amortized. It draws ~30W, and in France that represents a recurring cost of about 3€/month. But then again, this server would stay on even if did not host my email. Finally, there is the cost of my Regfish email account: 1€/month. But now that I think of it, I could probably avoid it if I used my Free account that comes with my home internet connection